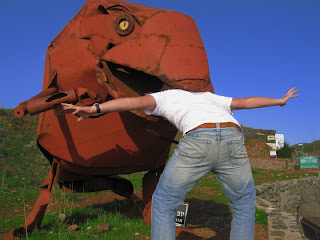 If I could choose one phrase that I heard more than any other before I left it would probably be "Wow, don't get blown up." Well, with all the trouble that we see on TV and read in the newspaper, I can hardly blame everyone for thinking that. For the benefit of the 88 students that will be coming here in the Spring (and, I should say, for the benefit of concerned parents), I think I should talk about the actual situation inside Jerusalem, inside Israel proper, and in the other countries that we visit.
I'll start by saying that I haven't met a bad person here. I haven't felt unsafe at any moment. I may have felt uncomfortable once or twice, but I was new and green (I wouldn't consider myself an expert after two months, but I'm not entirely ignorant). Jerusalem, a city of 800,000 people, actually has a lower crime rate than the Provo-Orem area. It isn't perfect, for example, just last week a young Muslim man died. But that was the first death in nearly 2 years. Even in the riots that occurred last month, there were no deaths, there were just injuries. Students spend 80% of their time in Jerusalem, if there ever are any problem, there are always rumors that precede it, and students are always kept clear of any areas that might be sources of contention.
Last week we were in Jordan. Jordan, just like most other places in the Middle East, is safer than most cities in the United States. We spent several hours wandering around Amman, Jordan's capital, after dark. Even Egypt, though chaotic at times, was absolutely full of people that loved to have you there.
I should stress, however, that all is not well in the Middle East. There are very specific rules that keep us students safe. For example, we always have to go out in groups of three, with at least one male in the group if we are going to be out after dark. This is principally due to the "curiosity" of young males around here. We westerners would call it sexual harassment. It has been known to progress to actual physical contact, but not when the rules are observed. I'm talking to Liberty, a friend of mine, and she says that there is a definite difference when there is a guy in the group, even during the day. Men aren't nearly as forward, teenagers tend to keep their distance, and the only comments are "One man, two women!! Lucky man!"
As far as physical security, we are well taken care of here. We don't act stupidly, and we don't really have much to worry about. Concerning security of the young ladies in the group, every guy here is ready and able to go with a group of girls and lend their presence. Basically, we recognize there are risks, there are risks to jumping off your bunk bed in the morning, but the risks are greatly controlled and the rules are specific. Aside from seeing Matt Durham eaten by a giant steel lizard, I feel safer than in Deseret Towers.
Posted by mattu00 at 6:24 AM