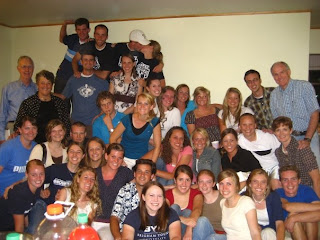 It occurs to me that, after writing about so many of the amazing experiences that the Jerusalem Center offers, I had never written about the post-JC times... So here's an update, one year to the day that we got home.
Jerusalem never leaves you. I'm certain that Jill still hasn't gotten over the chocolate pillow cereal addiction, and Tanner is probably still trying to recover from the nourishment he received at Samir's hand. :) But to describe exactly what I mean, on the bus ride from Jerusalem to Tel Aviv, we students, alone, had our own devotional. We had already left a few of our number behind, as family had come to pick them up and they were showing the sites of the Old City to their loved ones. During the ride, phone numbers and addresses were recorded, and my roommate Jake read from Psalm 137:5-7. "How shall we sing the Lord’s song in a strange land? If I forget thee, O Jerusalem, let my right hand forget her cunning. If I do not remember thee, let my tongue cleave to the roof of my mouth; if I prefer not Jerusalem above my chief joy." Needless to say, Jake wasn't the only one crying. :) But luckily we have been able to keep the spirit of Jerusalem alive for the past year.
Several of the JC people decided to room together. Actually, most of them decided to. I was one of the few that didn't live with others, but scarcely a week went by without seeing and hanging out with at least one friend from some of the best months of my life, and scarcely a month passed without some kind of get-together with at least 15-20 people showing up.
As far as personal lives go, I have to let you know that, out of the 16 guys and 28 girls, 3 guys are married(Tyson married Cambria and they're expecting!! Woo Hoo!), 2 guys are engaged(Mike is marrying my little sister, Rachel, in 4 days! Don't worry, I still love him and will probably forgive him eventually :) ). 4 girls are on missions with several who also have their papers in. 2 girls are married and 2 more are engaged, and all in all, 18 have graduated! As far as returning, There are two girls with plane tickets for this summer, and three more with plans to return this summer. Maybe they'll be so kind as to search out and bring back the bits and pieces of our hearts that are lying scattered throughout the Holy Land from Dan to Beersheba. They do have a weight limit, though. :)
The most common question that people ask differs greatly from the one we got before we left: "What was your favorite part?" That's a question that I've never been able to answer. I don't think I could decide between the peace of Galilee with its testimony of the life and works of Christ and sitting on the benches of the Garden Tomb early one Sunday morning while reading the accounts of the Resurrection and realizing that where it happened is of little consequence, but the fact that it did happen makes all the difference. I don't think I could choose between celebrating prayer with Muslims in the Salahadin Mosque in Cairo, feeling more loved than anywhere other than my own home, and dancing and celebrating Purim in a Jewish school in West Jerusalem with a good friend as our guide making sure no one knew we weren't actually Jewish.
But after a year, the beauty of Jerusalem in the spring still comes back to you with every new blossom. Your nostrils still long for the smell of pungent spices in the crowded streets of the Old City and you swear you can hear the shopkeepers yelling "Asherah! Asherah!" in an afternoon at the mall. :) Of course, I don't want this post to sound melancholy, but the fact is, Jerusalem is a lifetime. I now repeat my previous advice with this in mind, that anyone who goes should live, love, and learn, and their lives will never be the same.
Posted by mattu00 at 3:34 PM

Twelve years later, your post still stirred feelings of homesickness. You're right - you can never be the same. Thanks for posting.