Easter to the Tune of Prayer Calls 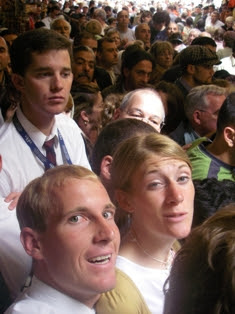 Easter in the Holy Land. I never thought this would happen to me. There were a lot of beautiful moments during the Holy Week. My favorite would have to be going Thursday night to the Garden of Gethsemane and reading all four gospel's accounts of the events in Gethsemane. We then read D&C 19 and some Book of Mormon accounts of Christ's suffering. After about an hour of scriptures, prayers, hymns, and meditation, the five of us that went came back to the center just before dark through the Orson Hyde Park, just a stones throw away from the Garden. It was beautiful being there on the anniversary of the exact night when Jesus took our sins upon him.
The next day, tens of thousands of people thronged the streets as the cross was carried along the traditional orthodox "Via Dolorosa." These pilgrims were then complemented by the thousand of Muslims getting out of morning prayers. These two groups were then complemented by the orthodox Jews that were in town for passover, heading all over the place, but principally in the area of the western wall. As I was walking back from the Ophel Archaeological park on Thursday, I counted 49 double-length busses bringing Jews from all over to the Western Wall. Suffice it to say, it was jam-packed.
My experience with the crowds came the next day. A few of us decided to go to the "Lighting of the Sacred Fire," a Catholic ceremony where the priest enters the Tomb in the Church of the Holy Sepulchre and, supposedly, his lantern spontaneously lights. The amount of pilgrims was suffocating. Our group managed to be at the front of the crowd near the police officers and it was a good thing. There were a few people from the back that were constantly pushing forward, trying to break through the police line and get into the church--the police were trying to get everyone out before they let anyone else in. I, myself, being caught in the middle of push and shove started to feel seasick. :) I'm merely grateful that I stand head and shoulders above many there, as I got the occasional whiff of cool air. We stood there crunched-in for at least 45 minutes. I no longer have a personal bubble. It was funny when a guy in our group, who has an inch and 40 pounds on me, finally had enough with the people pushing from that back. He turned around and helped the police with a little crowd control. He honestly created about 4 feet of breathing room around him where there was no space to begin with--all with his football-like tactics.
Our last stop was the sunrise service at the Garden Tomb. For someone who has never been to an evangelical service, it was an eye-opening experience. All in all, the timing was right, and I think I could probably make a good evangelist, I can rock with the best of them. :) One interesting comment. It is interesting to note how different translations of the Bible imply completely different concepts. My KJV teaches some amazingly profound doctrine with regards to man's origin and destiny, but the Bible that the pastor uses completely changes the wording so that all the symbolism that I have come to cherish is lost. I'm so glad that we have leaders that are inspired of God to help us understand the scriptures and that we have additional scriptures to help clarify the plain and precious truths that Christ and his prophets taught.
Posted by mattu00 at 8:19 AM