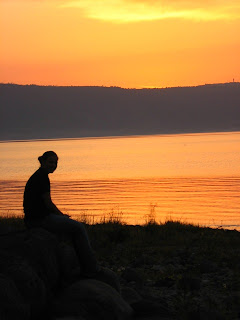 Well, my back is red from lovely sun on the shores of Galilee. No complaints, though. Galilee was awesome. If there were two places in the world that could be more polar opposites than Jerusalem and the Galilee, I'd be hard pressed to find them. Less than a week before we left it snowed in Jerusalem, and less than a week after we left I was burned crispy because, for the first time in a long time, I refused to put on sunscreen. The palm trees provided just enough shade for those on land, but I really didn't leave the water much that day.
I'd say that the main difference between the Jerusalem and Galilee is the peace of Galilee as compared with the constant movement of Jerusalem. Where Jerusalem looks almost nothing like it did at the time of Christ, Galilee seems completely unchanged. It was so inspiring it even brought out the poet in me...it had to dig reeeaaaalllly deep.
Our time in Galilee was by no means all fun and games. We had two religion class periods and one NES class every day but the sabbath and the field trip days. It might drive the point home when you realize that you are covering the entire gospel of Luke in two class periods...that means two reading assignments. However, the schedule was purposely set up to give us three entire afternoons free so that we could just spend some pondering time on the shores of Galilee. The New Testament comes to life in Galilee just way the Old does in Jerusalem and the surrounding areas. It was amazing to sit on the shore of Galilee reading the account of Christ walking on the water or his different travels around the area and see the exact locations where he would have walked, sailed, and preached.
This is just a teaser entry. It's late right now and I really need the sleep, Elder Holland's orders. I will write again soon, though.
Posted by mattu00 at 12:07 PM

hey! i was looking a few blogs and i get here.
It's cool.I leave you mine so you can take a look if you want.
see you.
http://puertacandado.blogspot.com

Refused to put on sunscreen? Didn't you learn from my mistake? Well If your sunburn is as bad as mine was... I don't think that you will ever refuse to wear sunscreen again!! I know I learned my lesson.

I just came across your blog and enjoyed reading about your time in Jerusalem.

I was a student at the Jerusalem Center 14 years ago. I'm so excited that the center is open again and how great that you have a small group.

Happy Easter in the Holy Land.