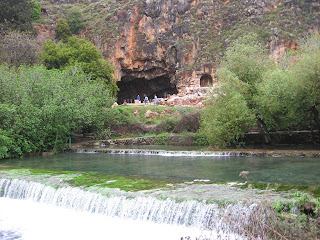 A wise teacher once told me that responsibilities are like juggling a bunch of balls. Some are made of rubber and some are made of glass. Some you can drop every once in a while, and some you absolutely can't. I figured that the finals that I just took today, plus the end of semester projects, were balls that I couldn't drop. So for those of you that feel like you've been bouncing up and down because I haven't done an entry in a while, just know that the rubber ball is back in circulation again. :) Honestly, I'm sorry I haven't had time to write more. It's always on my mind.
Well, I'm going to finish the Galilee field trip with a few comments on Caesarea Phillipi. For those of you that don't have an LDS King James Bible, I've included a picture of the headwaters of the Jordan located at Caesarea Phillipi. If you look at the picture, you'll see hundreds of gallons of water spilling over the different terraces. Just know that the wall you see along the back, plus some areas that are to the left out of the picture, is where all that water is coming from. The water literally emerges from the bedrock. It melts from the top of Mt. Hermon and flows underground for...well...I don't know how far. But it hits the thick layer of bedrock and just comes gushing out of the ground. Something similar happens at Tel Dan, several miles away to the northwest.
This area was once the capital of Herod Phillip's tetrachy in the North. When Herod the Great died, just shortly after Jesus' birth, his kingdom was divided between his three sons, and Phillip was given the Galilee. If you look in the background of the picture, you will see a large cave where, previous to a large earthquake, the water used to come from. Phillip built a temple to Caesar over the flowing water. He also built one to Pan, the little goat god with the pipes(He's the god of war), one to Nemesis, the goddess of divine retribution, and to the sacred dancing goats...ummm...
Well, for those who would like to know why we went here: it's really pretty. But this is where, in Matthew 16, Peter declares "Thou art the Christ, the Son of the living God." It is interesting to see the huge bedrock and hear Christ declare that the rock of revelation is what his church will be built on. From this rock of revelation flows huge amounts of living water. The imagery is amazing.
I will decline to comment on the bonfire that some students built our last night there, but I was the naysayer in the whole affair. Luckily it turned out okay, as my frantic babblings were swiftly ignored. :)
Anyway, after Phillipi, we dropped by Acre and a few other places, but unfortunately Caesarea (not Phillipi) closed early for Passover. Caesarea is a huge city down on the coast about 30 miles north of Tel Aviv. Herod the great built it and, much to his Jewish ancestry's chagrin, here established the first example of emperor-worship, as the Romans worshipped their emperor. He also established an amazing port city that rivaled even Rome in it's splendor. We took some time in the bus outside the gate and enjoyed some little bit of the scenery.
When we got home, Jimmy was waiting there with the favorite meal here, chicken with some great barbecue sauce. He also managed to have some "chocolate pillow" cereal, as some people here would probably go into a coma if they didn't have it. :) Then we all managed to crash into bed.
Posted by mattu00 at 9:01 AM