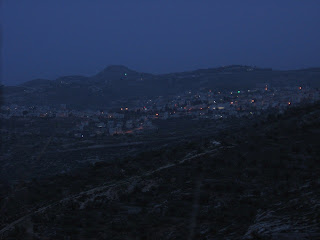 There are so many "traditional" sites in the Holy Land. The traditional site of the burial of Absalom, the traditional site of the devils going into the swine, the traditional site of the burial of St. George's second-favorite dog, etc. The fact is, many of the traditional sites were established in the 3rd, 4th, 5th centuries, even later. So how can people know that an event occurred in a specific area 400 years earlier? Well, archaeological evidence often points to a site, but it's a science that is up to debate.
Just for Mormons, we can be relatively certain about a few sites. Two modern prophets have been to the Church of the Nativity and said, about the grotto, that it was close by that the Savior really was born. They have said similar things about the Garden Tomb. Well, it was really quite special being down in the grotto. I bent down and touched the silver star that marks the traditional birth place of the Savior. It was actually oily, as if there was a ceremony during which they annointed the star, and it tasted like olive oil...just kidding, no way was I going to taste it.
The church was absolutely amazing. It is one of the oldest Christian churches in the world, having survived both Islamic and Persian raids. The old, Byzantine mosaic floor is visible through trap-doors in the current floor. The pillars are made of limestone but were polished until they looked like marble. There are actually 3 different churches that have their own little sections and they constantly squabble over who gets to do what.
Outside there are tons of tourist-hungry shopkeepers (the wall really put the squeeze on their source of income). Our group alone completely cleaned out the immediate vicinity of its Bethlehem Blankets. (They're beautiful little blankets. A lot of LDS people bless their babies in them.) My sister even bought an olive wood carving of her namesake, Rachel. Once again, my frugality complex shone through, and I limited my purchases to a few blankets. I'll have to get over that eventually, and I will, I just want to make sure I'm getting what I really want with my money. Oh, BTW, the picture is twilight over Bethlehem, from a shepherd's field. The mountain in the background that looks like a volcano is the Herodian, the huge stronghold that Herod the Great built.
After Bethlehem we spent several hours in a field that is still used by shepherds. After eating for a while and enjoying some quiet reflective time to read scriptures and ponder, we had a beautiful little program with Christmas carols, Luke 2, and testimonies. It was something else to sit on a hill where shepherds lived and worked at the time of the Savior's birth. You could look over the hills to the old city of Bethlehem and just imagine that the angels were appearing to the Shepherds. After the angels left, they might have just looked up and seen the candles in the windows of Bethlehem. They then would have run straight across the fields, maybe they took the road, but they went straight up to Bethlehem and worshipped the Babe in the manger.
This next week is pretty busy, we're headed up to the Galilee until a week from Monday. If I can get access to the Internet, I'll let you know what we're doing. If not, you won't hear from me 'till we get back.
Chau!
Posted by mattu00 at 12:43 PM