Free Days, the Cure for Everything Else 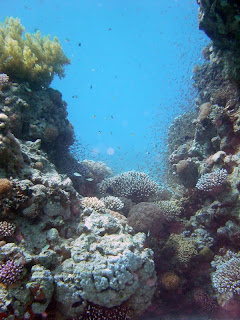 As much as we love learning about the scriptures, studying Near-Eastern history, looking at tells and running around the area, the occasional free day is always a welcome break. Last time we went down by Gaza, but this Friday was a day unlike any other.
300 kilometers south of here is the northern tip of the Red Sea. This is Israel's southernmost border and a huge tourist town named Eilat has been built there. To tie it into the scriptures, Solomon built a navy, and they set out from that area, previously called Ezion-Geber. I was actually kind of shell-shocked when I went there. It was much more like a beach town in Europe or the South, and two months in a highly orthodox community leads you to expect that everyone must dress that way. Scandalous that people should wear shorts! :) I soon learned to ignore it and it turned into a relaxing day filled with, well, nothing that we had to do, just a few things that we wanted to do.
The few things that we wanted to do included, lying on the beach, playing frisbee on the beach, snorkeling (a first, for me) just off the beach, and lying on the beach. Coming from someone who's had a full-time job every summer since he was 13, this relaxation was a new experience, but one that I could get used to, every once in a while. :) There is a beautiful coral reef about 6 kilometers south of town in an Israeli National Park that is 3 kilometers long and 200 meters wide. I've long been mortified of deep water, but aside from the few moments of panic at the start, snorkeling alongside thousands of fish, sea snakes, and even a little octopus was one of the most relaxing experiences I've ever had.
After several hours just taking it easy on the beach, swimming out to "Moses' Rock," the most beautiful area in the park, and enjoying the sun, we headed back to town to quench the obvious thirst in the group for largely inexpensive goods. The girls in the group, on average, bought at least 2 skirts each, and the sunglasses, interesting jewelry, and ice cream stands were frequented. Don't ask me what I bought, you'll be sorely disappointed to find that it was confined to dinner and an ice-cream bar. There's the frugality complex shining through. :)
I'll get a picture up that someone in our group took, but he hasn't posted on facebook yet. In the meantime, enjoy this picture from pbase.com.
Y'all have a great day.
Posted by mattu00 at 12:40 AM

Your snorkeling experience sounded a lot like the one that I had when I was in Puerto Rico. However, my experience ended with a bad sunburn. I hope that yours turned out to be a bit more comfortable. ; )