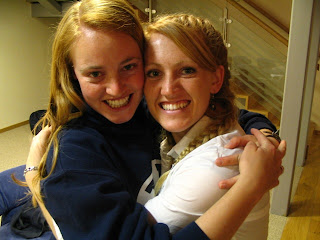 Even in times when finals are bearing down on you, you can still find time to have a little fun. Last Wednesday, just before our dignitaries got here, we had a "Western Night" at the snack bar (Did I mention that we have a snack bar? It's open every night from 9-10.) Well, the western night became a line dance party, the line dance party became a swing party, and then we just dropped the pretense all together and had a "whatever you happen to be able to do, or not do" dance party. I prefer to call my dancing "Raw, untamed talent" as Danica so aptly put it. Of course that was refering to my "Irish Dancing." The picture is of Jane and Carly. Jane was nice enough to let me snag her pictures, but on the condition that she got honorable mention. Well, here it is. :)
Aside from seeing an already exhausted Landon lift the great Matt Durham high above his head in a bird-like fashion, we've been busy both with finals and with making the most of the experience. Today we went to the Archaeological park that is right outside the Al-aqsa mosque. It was quite interesting walking around on ruins that date back to the time of the Second Temple, because most of streets from that time period are at least 20 feet under your feet.
That's another interesting thing about Jerusalem, the city has been destroyed and rebuilt so many times that the ground level from 2000 years ago is at least 10-15 feet below the current ground level. We all decided that the rocks and dirt in Jerusalem have actually evolved to the point that they reproduce, kind of like coral.
Anyway, tomorrow is our little float in the Dead Sea! We also get to go to Masada, a mountaintop fortress built by Herod the Great (well, his men built it, you know), and Qumran, where they found the Dead Sea Scrolls.
Enjoy the rest of your day!!
Posted by mattu00 at 5:56 AM