The Hashemite Kingdom of Jordan 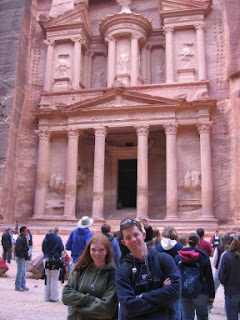 Well, it's been a few days since I've written, but that's because we've been in one of the few remaining monarchies on earth, officially called the Hashemite Kingdom of Jordan. It was one of the most incredible, yet rushed, experiences that we've had this semester. We saw everything from great Roman cities of the Decapolis (mentioned often in the New Testament) to Petra, an area that looks just like Canyonlands, if you ignore the huge monuments that are literally carved out of the sandstone walls. To orient you, I can mention that "Indiana Jones and the Last Crusade" was filmed in Petra. The huge facade in the sandstone that, in the movie, contains the cave where the Holy Grail was kept is about a mile down the canyon. All these amazing sites that we see make me regret not having an amazing camera (That's going to be my graduation present to me...It's official). You can honestly spend days at each site and still not see everything that you want to.
The thing that stood out to me the most about Jordan is the King. King Abdullah II has been king for over 10 years. His father was King Hussein. Everywhere you go you see pictures of him, on walls, bumper-stickers, postcards, everywhere. Honestly, most everyone in the kingdom seems to love him and he seems like a very good man. The term "Hashemite" comes from the name "Hashem," who was the great-grandfather of Muhammad. Every king of Jordan is a descendant of Hashem, and they all seem to love that connection to Islam.
One of the nights we were able to spend time with a bunch of members from the Greater-Syrian district of the church. The district president that we met is responsible for members of the church from Egypt to Jordan to Syria to Lebanon. The restrictions on proselytizing are mostly the same in those countries, except that if people ask questions, a church member can answer. If a Christian wants to be baptized in the church, in some countries they can. But it is against the law in all of those countries for a Muslim to convert to Christianity. After the meeting on the state of the Church in the area, we spent time in broken-English and broken-Arabic getting to know the members. It was so much fun!
Other places that we were able to visit include the traditional site of Jesus' baptism (it's on the border between Israel and Jordan, but it's easier to access from the Jordan side.), the traditional site of the miracle of the Swine, and several others. The site of Jesus' baptism is associated with several other events, the crossing of the Jordan River by the Children of Israel, just before their conquest of Jericho, and the crossing of Elijah and Elisha just prior to Elijah's ascension in the chariot of fire. These sites are all described in a similar manner in the scriptures.
Unfortunately for us, the river Jordan has been largely diverted away for agricultural purposes, so the height has dropped about 20 feet. Instead of being 40-50 feet wide, it is about 12-20. It also is very dirty, but I touched the river Jordan and saved 1/2 liter of water anyway. It's sitting on my shelf downstairs.
Posted by mattu00 at 10:51 PM

Yay for Jordan! I'm assuming that you spent time with the members in Al-Husn...if you did, that's really too bad. We should have had to give our love to the Tashmans (which comprises most of the branch, really).

Oh, and the Red Sea, too...but we were on the Jordan side in Aqaba. We could see Israel though!

I COME FROM AL-HUSN.
WHAT I DID NOT UNDERSTAND IS WHICH BRANCH YOU ARE TALKING ABOUT. I AM ASSUMING IT'S A CHURCH. WOULD YOU BE KIND ENOUGH TO TELL ME.

Majdi, Don't know if you'll read this, but we were talking about the branch of the Mormon church in Al-Husn.