Welcome to the Jerusalem Center! 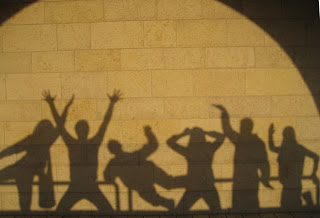 Well, the people that we said that to are probably more qualified to welcome us, they've been here much more than we have. But this last week a breath of fresh air coursed through the building in the form of Elders Holland and Samuelson and President Kearl, as well as all their wives. We've had plenty of opportunities to interact with them and get to know them better. I've discovered that once you're in a conversation with them it's just like you're talking to your grandparents, you just don't know them quite as well.
It's a different experience living in the same building with an apostle and a member of the Seventy. Almost every student has a story to tell about a quick conversation when they ran into them when they were by themselves. For example, somehow both Elders Holland and Samuelson found out that I'm into computers, and each in their turn has called me a "techno-geek." :) Not in any disparaging way, just as a statement of fact. We all know that "in the mouth of two or three witnesses shall every word be established," and "whether by mine own voice, or the voice of my servants, it is the same" so I guess that my being a "techno-geek" is doctrine now. The other students say "He hugged me, twice!" "He patted my head!" "He liked my broken-leg trick!" We all loved the District Conference, followed that evening by a Q&A session especially for the students. They got here Thursday, will be here on goodwill errands until Tuesday, and then they fly out again.
It's not too common that the Brethren would be able to come all the way out here, but when the Center closed, a lot of good relationships and ties were put on the back burner. Now that students are back, it's time to reestablish those ties, so the Brethren are happy to come out and see their old friends after a very long Sabbatical.
Just so people know, President Kearl, the dreaded Econ 110 professor, is one of the best men that I've met. He's direct, he lays the issue down as only he knows how to do, but you always know where you stand with him. He's also a very insightful and humble man. Well, no one likes a kiss-up, so hopefully he doesn't actually read this.
We have exactly a month left here. We're in the middle of our first round of finals that includes Old Testament, Arabic or Hebrew, Palestinian-Islamic History and History of Judaism. After this week, for the rest of the semester, we have double-time in our Near Eastern Studies class and, finally, the New Testament. We actually started the New Testament for class this morning and I can honestly say that if you want to understand the New Testament, read the Old. Whereas I normally would have just glossed over the first four chapters of Matthew, I found so many connections to previous reading that it took me at least three-times longer than it normally would have.
Well, I'd better sign off, but I can't do so without offering a big "Congrats!" to my cousin, Conrad, and his wife, Donica, who just yesterday became mommy and daddy. So congratulations, and I expect to be able to hold every one of my new cousins, nieces, and friend's babies when I get back in a month.
Chau!!
Posted by mattu00 at 4:24 AM

Andrew and I went to a fireside about the JC yesterday. It was pretty cool...although I have to admit you guys have it pretty easy out there. :)