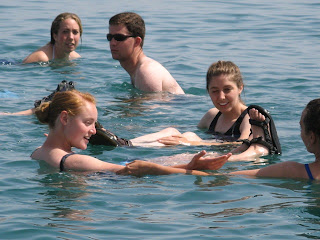 As I was looking for an open dryer yesterday, I found that one person had put just two items through the wash: a swimsuit and a sweater. Far from being perturbed by the amount of items, I found that this is a perfect depiction of a winter semester in Jerusalem, from Dead Sea swimming to Shepherd's Field freezing, all within 36 hours.
As you can tell, we went to the Dead Sea last Wednesday on a field trip. By far, it wasn't the only thing that we did that day, but it's about the coolest thing I've done in a long time. The Dead Sea is 1370 feet below sea level and, due to the diversion of river-water for crops, is falling quite rapidly, as in 1 meter a year. It is also the lowest dry place in the world.
If you've never swum in either the Dead Sea or the Great Salt Lake (well, there are a few more saline lakes), there really isn't a way to adequately describe it. As you dip down, you have absolutley no feeling of falling. I wouldn't even call it floating, I would call it suspension. We took turns curling into a ball and letting others in the group spin us around. If you push yourself up out of the water and try to sink down, you invariably don't get in past your chin, and all the time you can feel a film of salt and other minerals on your body. As long as you don't let it get in your eyes, nose, mouth, or ears (ears aren't too bad), you feel just fine, but if you swallow some, you'll have a sore throat for a month. :)
Before the Dead Sea, we hiked to the top of Herod's Fortress, Masada. If there is one word to describe Herod, it would have to be paranoid. He was constantly in fear of three things: his family, his subjects, and his nemesis, Cleopatra. To qualm these fears, he spent enormous amounts of time and energy to build several places of refuge, Masada being one of them. He even built a mountain. He built it. It's called the Herodian, and you can see it from the hills around Bethlehem. Many years after his death, Masada fell into the hands of Jewish Zealots, and the story has it that they held off Roman forces for months and, instead of submitting at the very end of the seige, they robbed the Roman forces of their victory by committing suicide. Kind of a gruesome ending, but every Israeli schoolchild is taught the story. The unofficial theme of the Israeli army is "Masada has fallen, and it will never fall again!" There were 2 women and 5 children that didn't commit suicide, and they preserved the story.
We also went to Qumran, the site of the Dead Sea Scrolls. This area was the ancient home of the Essenes, a group of hyper-religious, insanely strict jews, who even went to the point, some scholars argue, to say that using the restroom on the Sabbath day constituted a Sabbath-day violation. They probably lived in Jerusalem until they got really mad at the High Priest, at which point they went to live by the Dead Sea. The most suprising thing about this area is that the scrolls that they had hid 1900 years earlier were not discovered until 1947. They were discovered by a young Bedouin shepherd boy who found a strange crevice in the course of a normal day. He threw a rock down, heard breaking pottery, and the greatest archaelogical discovery of the 20th century was unearthed. Go figure.
Well, I'd better break this entry off. Don't worry, I'll talk about Bethlehem, just in the next entry. :)
(btw, a huge shout out to Breanne White for giving me her pictures of the Dead Sea. I was too busy swimming.)
Posted by mattu00 at 6:05 AM

You've got a farmer tan on your neck and arms... the farmer tan must be the secret of your charms... every girl wants a man with a farmer tan.