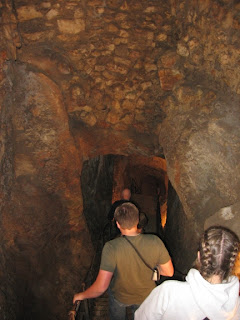 2700 years ago, the Kingdom of Judah was severely threatened by the Assyrian ruler, Sennacherib. The Assyrian army, which had just twenty year earlier deported the Ten Tribes, attacked the kingdom of Judah and destroyed every single outpost. They even destroyed the highly fortified city of Lachish and the inhabitants were brutally killed. The Assyrian battle tactics were so brutal that, often, all they had to do was send a messenger to a city to tell them that they were coming, and the city would surrender without a single shot.
Hezekiah, however, had been preparing. During 5 years, he built a broad wall to extend around the newly-settled Zion's Hill, which is just west of the Temple Mount. He was faced with the dilemma of water, though, because the water sources were a weak point in the wall. During 5 years, his people had been digging a tunnel from the lower portion of the city, now called the Pool of Siloam, to the Gishon Spring. The tunnel winds around for 1700 feet, possibly following an existing karst in the rock, and provided a water source that was completely undetectable to the invading army.
The tunnel was finally rediscovered in the mid-19th century. It served at least until the time of Jesus, as He instructed the man who was blind from birth to go and wash in the pool, so that he could be made to see. Throughout the centuries, people have determined that the Pool of Siloam had already been found, but a site that casts a larger archaeological shadow has recently been found about 200 feet farther south. You can see it in the picture to the left.
Well, Thursday afternoon we all went deep, dark, down into the depths of Warren's shaft and 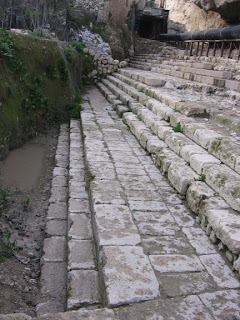 accessed the Gishon Spring. From there we wound our way down underneath homes, streets, and markets to the Pool of Siloam. Being the nerds that we are, we did everything from, of course, splash the students in front of us, to sing "The Lion Sleeps Tonight," to convert the tunnel into a Slip & Slide.
It was unanimous. We're all doing it again. :-)
Posted by mattu00 at 9:27 AM

But, have you gone through completely in the dark?