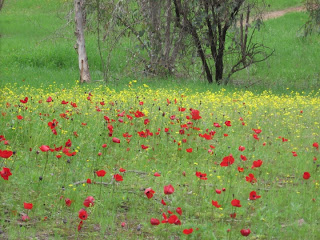 If any of you read my entry on the political situation here, upon reading my title you may have dropped your Krispy Kreme into your Stephen's Hot Cocoa. (It pays to know your audience:-). But no cause for alarm, we're all back, mostly in one piece, and we spent a great day cycling in the area near the Gaza Strip. Every once in a while we have a free day. No classes, no homework, "No more rulers! No more books! No more teacher's dirty looks!!" Or at least 'till tomorrow. Today most of us went to a kibbutz that's right on the Gaza border. It offered some of the most beautiful riding that I've ever seen.
I should probably give you a bit of history about Gaza. I don't know much about the modern history yet, but I can start with its biblical significance. This is one of the five cities of the Philistines that was built on the coastal plain. It was strategically placed to intercept most trade between Egypt and the rest of the Middle East. It isn't too significant in biblical texts. There are a few prophecies about Gaza, but the only story that has focus there is Samson's. Samson, before his demise with Delilah, had recently taken the gates of Gaza and carried them away. The gate is the most important part of any city's defense, and Samson basically knocked it out singlehandedly(That's embarrassing...). Well, after Delilah he was taken to Gaza and tied between two pillars, which he collapsed on the three-thousand people that were there celebrating his capture.
It was interesting to ride through beautiful countryside and see peace and serenity but know that just 2 miles south an American can't walk anywhere. The distant booming noise was either thunder on a cloudless day, or heavy weaponry. The kibbutz that we rented the bikes from has 8' high, double barbed wire fences with German Shepherds stationed every few hundred feet. Border Patrol is constantly running back and forth along the Gaza border in Hummers, and the lookout never sleeps.
We had a man from the US Consulate come and give a forum about Palestinian and Israeli security. He said that the Gaza strip, instead of really being controlled by Hamas or Fatah, it is controlled by clans. Once you know this, you'll notice in the news that those that are killed in Gaza rarely are governmental leaders, but members of families that have attacked someone else's family, so the blood feud goes on. Hopefully things can calm down, but in Gaza, peace doesn't seem to be an option.
Posted by mattu00 at 8:32 AM

Are those red poppies? If so, it seems symbolic to me that a field of red poppies would flourish so near a constant battleground. Poppies are symbolic of death and a renewal of life - especially after WWI. Remember the poem "In Flanders Fields"?

Yes, those are red poppies. Something interesting that we've learned here is that the "Lilies of the Field" are actually what we call poppies today. They're thick everywhere here! It really adds to that thought of they toil not, neither do they spin, but the Father takes care of them.

Oh! That adds a new level of insight for me on "how they grow". The seeds of poppies can lie dormant in a field until something churns up the soil, then they suddenly flourish. "They toil not" but grow really easily in almost any kind of soil as long as the soil is loose. I wonder if that can relate to how we grow the most when we go through a trial and something harrows up the soil of our heart.