Samson and Goliath..errr, I mean... 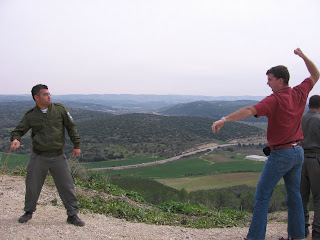 I wonder how many people, when they first see the title think "Hey, it should be Samson and Delilah," as compared to "Hey, it should be David and Goliath!" Well, whatever the first reaction, I'm telling you about both of them today.
Any story about either of them would have to start with the Philistines. The Philistines weren't native to Palestine, it says that they came from the sea. After a failed invasion of Egypt, they settled in five cities on the coastal plains of Canaan and the Israelites, up in the Judean Highlands, became their next potential conquest. Each of the five cities is positioned near the entrance to one of the five valleys that access the Judean Highlands. With that bit of background, we can talk about some interesting characters. . . and this is starting to sound like a geography lecture. :)
Most people don't know the whole story behind Samson and Delilah. Samson was a Nazarite, or a person who's life was dedicated to the Lord much like Samuel was. In addition to obedience to the Law of Moses, a Nazarite couldn't come in contact with a dead body, have anything to do with grape products, or cut their hair. Samson's power came from this pact that he had with God. He was married at one time, but his wife's philistine countrymen killed both her and her father in response to Samson's burning of their crops. Samson was a great support for the people of Israel until Delilah. In his hometown of Beth Shemesh, which lies in the valley that leads to Jerusalem, he was deceived into divulging the source of his strength and taken to Gaza where he died in quite the dramatic way. He's such a colorful character, and yet so indispensable to Israel, that I think he has only one "kindred spirit,"as it were: Orrin Porter Rockwell. Gnaw on that for a while. :)
The fortress of Azekah is located on a high, steep hill that offers a commanding view of the surrounding valleys, especially the valley of Elah which leads to Bethlehem. The interesting thing is that it actually lies only five miles from the city of Gath, Goliath's hometown. It was below this fortress that the famous standoff of the two armies took place. Goliath came out and challenged the Israelites for many days. When David challenged him, we have to wonder what each was thinking. I think I can offer a thought on David. He knew that if he were to fail and if the Israelite army were defeated, then there would be nothing between the Philistines and his family back home in Bethlehem. I think that offers sufficient motivation. Goliath, however, I think knew he was in trouble. He was armed with a sword and heavy javelin, neither of which were any good for long distance fighting. Even though he was many times more dangerous than David in close combat, he didn't stand a chance because David didn't offer him one. From probably a good fifty yards away David took him out with one stone, and he was gone. I'd just like everyone to know that I now have the exact stone that was used in this infinite battle, it's sitting in my desk drawer. I got it just after my epic battle with an authentic Israeli David, shown above (granted, his name wasn't David, but at least he's Israeli). I lost.
Posted by mattu00 at 5:50 AM