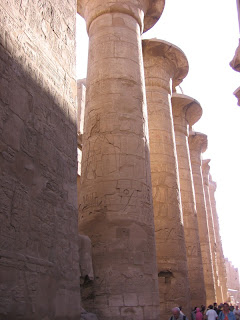 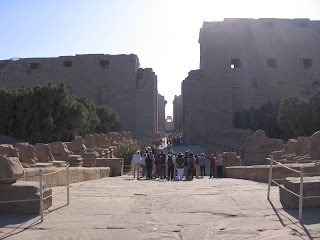 Well, people have asked for two things, pictures of the temples and a depiction of the obelisk's construction. Here goes:
The obelisks were cut to the south of Luxor. The actual transportation, then, was easy because the Nile flows north. They were transported onto large barges and floated downstream, hopefully they don't miss the landing. :)
All around a large granite base, workers would have built huge mountains of mud bricks, creating a volcano-like structure, and filled in the cavity to the very top with sand. Off one of the sides they would build a large ramp out of the same brick, and then transport the obelisk, base first, up to the top of the mountain. With the obelisk horizontal and the base resting on the sand, they would then tunnel a hole in the side of one of the mountains and allow the sand to escape. As the sand level went down, so did the base of the obelisk, until it gradually became erect. After all was said and done, the obelisk was perfectly straight, the bricks were removed, and a beautiful obelisk was in place. The story of the pillars is just as impressive, but I have a Judaism test today :S, so I'll slide you some pictures and tell you about our good friend Samson next time.


P.S., a word about the pictures. I've included at least one person in every shot. In pictures they just look like an erector set. I thought you should at least get an ides of the enormity of the place.
Posted by mattu00 at 11:03 PM