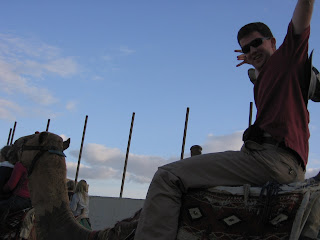 I don't really know if it's supposed to be "travelog" or "travelogue." It probably depends on if you're from Britain or not. :)
Anyway, I promised I'd share some of the things that we did, and I've determined that it will have to be on multiple entries, or it won't work. There was simply too much to see.
After our first day on the road(Sunday, January 28), we spent the night at a kibbutz in the Negev Desert (I talked about kibbutzim in the "Rehovot" entry). It was amazing to see desert sands all around and have huge patches of green where they were growing potatoes, onions, dates, mangos, and hundreds of others. The ice cream shop, I'm sorry to say, puts Ben and Jerry's to open shame. It simply melts in your mouth. . .er. . .oh well. After a traditional Bedouin dinner and amazing music from the kibbutz' singing group, we played games until late with a Jewish guy about our age and then turned in.
Bright and early we got up and were on our way to the border. After passing through, we encountered the largest stretch of nothingness I've ever seen, the Sinai Desert. When we made it through (a feat achieved with plenty of singing, improvised rap, and stand-up comedy, complements of Matt Durham), We encountered exactly what we thought Egypt didn't look like. In Cecil B. DeMille's movie "The 10 Commandments," Egypt is all desert. But in reality it's green and lush wherever it's irrigated (the ancient egyptians used irrigation techniques, though).
Cairo is, in a word, indescribable. I'll try, though. The houses are principally in apartment buildings that, in our opinion, wouldn't have move-in permits yet. The roads would drive any westerner nuts. As a Mercedes flew by, 3 10-year old boys were whipping a cart and mule up to a roaring speed of 15 miles per hour. People crossing a crowded freeway don't even bat an eye, and a grand total of 5 traffic lights twinkle bright red and green. Surprisingly, this chaos is accepted and there are very few accidents. When off the major intercity roads, people rarely go faster than 30 miles per hour. We always seemed to have a police escort and at least one armed security officer on the bus.
The next day, it was off to the pyramids. We were actually able to go inside the second one. The egyptians have constructed a second entrance to the burial chamber. Even so, it wasn't made for the average 6'3" Matt Thomas. I'm sorry to say (you have to report the bad with the good) the inside wasn't all that impressive. I'm sure it would have been better had we not been on the average tourist tour, but I'm not sure how to get any other one. The sheer size, however, was astounding.
We also hit up the sphinx, rode some camels (I didn't think Danica would ever stop giggling), were shown the tour of good shopping districts, and overall, had a great time.
Posted by mattu00 at 10:10 AM

When we got to Egypt, we were shocked by how much water was available. We were pretty much in water heaven. Afterall, we were used to having water 5 days a week on a good week and having nothing for at least 2 days...and then we were always scrimping on our water use for the days we did have water.

Did you get to ride a feluca?

Hey, did Matt Durham serve his mission in Rome? If so, I know him! Say hi if so!