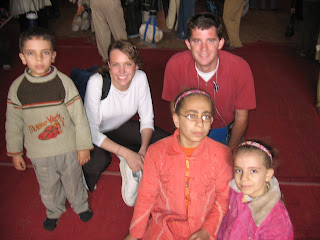 I'm sure people want to hear about amazing sites that we visited like the temple of Karnak, the Great Pyramids at Giza, and the Valley of the Kings. It was absolutely incredible to be in the places that we've studied since we were children. Those topics, however, will have to wait until my next entry. I want to share with you the highlight of my trip, pardon the soapbox. :)
Whenever a person from the west, I was included in this, hears the word "Arab" they automatically think of radical fundamentalist Islam, al-Qaeda, and civil unrest in the middle east. With a slightly different perspective, I thought of pushy vendors, 5:00 am prayer calls, and young men that I keep away from my sister. But Friday, just after noon-time prayers, I had the opportunity to go to the Muhammad Ali Mosque, the principal Mosque in the Cairo area. There were thousands of Arab Muslims there and, just as every other time, I was on my guard for an inevitable pushy sales pitch or a request to marry one of the girls in the group. What I got was polar opposite. I have never felt more welcome by any group of people at any other time in my life. Random people came up to me and asked me to take pictures with them. A man wanted me to play with his little kids while he took pictures of us (That's me and Megan with Ahmed's Kids). I'm surprised that the girls in the group didn't suffocate with all the hugs they were getting. The Arab people are of the sort that will instantly be your friend, feed you dinner, and give the you the shirt off their back. Then they take down your email address and make sure to send you their wedding invitations.
I asked Sean, a member of our group that has lived in Arab Countries, if they were all that way, and he answered with a resounding yes. Whatever anyone else says, know that there's not another group of people in the world like the Arabs. I hope that when we hear the word "Arab" from now on we think of genuine hospitality, wonderful friendship, and some of the most Christlike people on earth.
Posted by mattu00 at 10:47 AM

I'm SO glad you liked Egypt and learned to love Arabs!

Tell Sean "Hi" from Nancy and Andrew... I happen to think that he is one of the most hilarious people alive and he certainly helped keep us all entertained in Jordan!

I'm assuming that this is the Sean that I know...if it isn't you can tell him hi anyway...he just might think that's kind of creepy.

Thanks. I enjoy the posts. Use to live in Egypt and love the Middle East. Just as a side you'll want to say "Arab Muslims" instead of "Arabic Muslims". Arabic is the language, Arab is the ethnicity.