Land of the Patriarchs 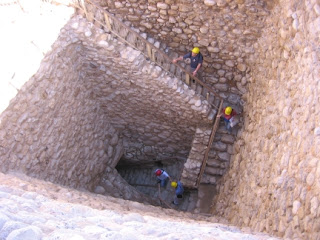 Every week, we all climb aboard a bus (we leave promptly on the hour, if you're not five minutes early, you really do get left behind) and head off on a field trip to see different important sites from the time periods that we're studying. Last time we went on the geography trip, but yesterday we went to what many call "The Land of the Patriarchs." This is the area that Abraham, Isaac, and Jacob spent a lot of their lives.
Our first stop was Gerar. If you look in Genesis 20 and the following chapters, you find the stories of Abimelech, the birth of Isaac, when Hagar was cast out of the tent of Abraham, and many others. There were all sorts of old archaeological digs around but the interesting thing about this site was the absolute serenity. I took about 15 minutes to lay down in the grass, even if it was a little coarse, and just think about my time here. It was beautiful and green as far as the eye could see, and, even though in a few months it will be bone dry, you could see why the patriarchs would have wanted to settle here. Interestingly enough, even though both his father and his son traveled far and wide, Isaac never went more than 100 miles from this spot.
Next on the list was Be'er Sheba. The name of this site literally means "Well of the Covenant," or "Well of Seven" because of the covenant that Abraham made with Abimelech that they would get along peacefully with each other. From this vantage point, it seems strange that anyone would want to live here. There seems to be very little water for irrigation, and the deep well outside the city appears to be the only source of water for miles. Even the position of the well is quite uninspiring, as during a siege it would provide water to the opposing forces, but not to the people within the city wall.
The strength of Beersheba, however, comes in the yearly rainfall, and when it rains, it really rains (we've seen that already). The city is designed so that most of the water would flow to a point and collect in huge, underground cisterns. The cisterns(the entrance is shown in the picture) could hold 500 cubic meters of water which sustained the city through the coming 10 months of drought.
While the first two sites were at least habitable, it would seem that those who settled in Arad were gluttons for punishment. This city, just like Beersheba is designed to catch the rainfall that it received. The fascinating aspect about this city is it's religious worship. Three Canaanite temples occupy a central location in the city, just across the street from the palace (probably about 60 feet square). These temples, according to modern values, would be pagan and similar to houses of prostitution, but they were fascinating all the same. The fourth temple in the city was up on the citadel, and this one was Israelite. The layout of the temple was quite interesting, with a sacrificial altar in the outer court, a holy place, and a holy of holies in the back. On each side of the holy of holies, oddly enough, there are storage rooms. We don't know if the temple was authorized or apostate, but either way it was cool.
Just to let you all know, we leave for Egypt on Sunday. There is no way I'm taking my laptop, so I'll be talking to you after we get back, but I'll have plenty to write, so check back!
Posted by mattu00 at 3:45 AM