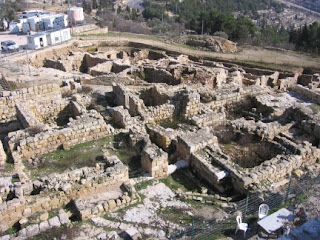 The geography field trip was really fun! We were able to go to several different areas and start to get the feel of the land. One adjective doesn't suffice to describe the area around Jerusalem, it needs two: up and down. Jerusalem sits up high in a mountain range. If you were to go 11 miles to the east, the elevation shoots down 4000 feet to the lowest place on earth, the Dead Sea at 1300 feet below sea level. But if you go just 1/2 mile south east of Jerusalem, you'll come to Kings Dale, where the Kidron, Tyropean, and Hinnom valleys meet (These three form the natural boundaries of Jerusalem), Kings dale itself is at least 1000 feet below Jerusalem.
From Deir Mar Elyas we were able to look into the west bank and into Bethlehem. Unfortunately, the haze didn't make for good pictures. We also went to the traditional tomb of the Prophet Samuel. It doesn't actually hold up historically, but one cool point is that there have been over 20 cities that were built and leveled on that hilltop. The picture at the top shows why it's an archaeologist's best dream and worst nightmare: because of all the layers of debris.
One highlight of the trip for many people was the sight of our first camel :) . "Kojak" was quite amiable, even though he mistook Lindsey's hair for a tasty snack just seconds after this picture was taken. She claims he was just trying to give her a kiss.
Well, It's past my bedtime. :) 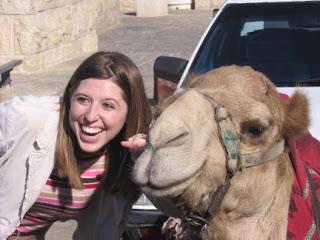 Thanks for writing this stuff. :) I'm enjoying it. A lot.

That is so my roommate! The girl, not the camel... Thanks for keeping up to date bro, I'm seriously behind in my e-mailing. But the fact that you keep your blog up makes life easier. "If you want to know what I've been doing, just go to Matt's blog..." Love you! :)