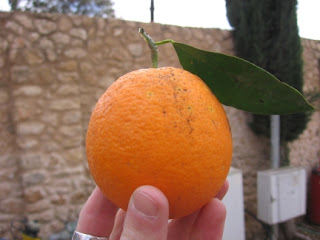 On Wednesday we had our first free day. No class, no scholastic obligations, we just got into groups and left Jerusalem for a day. Earlier in the week we divided into groups according to where we wanted to go, Tel Aviv, Rehovot, or Soureq Caves. I went to Rehovot and my sister went to Soreq caves. Everyone enjoyed their prospective trips. Those who went to Tel Aviv enjoyed a Mexican dinner on the beach and a lively atmosphere. The caves were beautiful and they went to the Tower of David Museum afterwards.
Rehovot was actually more of a historical trip, but entertaining just the same. We saw the house of Dr. Weisman, the first president of the State of Israel. We also went to the Weisman Institute, one of the leading research and development schools in the world. They are working of cancer, diabetes, microchip technology, and thousands of other projects. They even have their own particle accelerator. The last place in the Weisman Complex that we visited was the Science garden. They have all sorts of hands-on scientific experiments. It's principally made for pre-college students, but toys are toys no matter what our size :) . They have those whisper dishes like in the Eyring Science Center, but they actually work. My favorite was an exhibit to simulate the gravity one would feel on the moon. Apparently I could be a great gymnast on the moon.
After the Weisman Complex we went to a historically important orange grove (sound's strange, I know), picked our own oranges (Most of us hadn't done that before), and squoze orange juice. I was amazed that some members of our group had never squozen oranges before. Oh well
The next destination was really a highlight of the trip. At first glance, the Ayalon Institute is just a kibbutz, a jewish settlement in which everything is communal. In a kibbutz, food is eaten together, clothes are much the same, even children are raised by the community and not the parents. Well, underneath the kibbutz is an ammunition factory. It was created before the 1948 war for an independent Israeli state. At this time, the Israeli's couldn't make arms openly, they had to hide production or be found out by the British. They therefore built a tennis-court-sized production facility deep underground. It was responsible for 16,000-40,000 rounds of ammunition a day, and all the while, the other members of the kibbutz didn't know that there was a factory under their feet. The opening was covered by a washing machine in the kibbutz laundry and 40+ people worked down there 8 hours a day, 6 days a week.
The last destination was a beekeeping facility where we found out more about bees and honey then we ever thought possible. The highlight for most of us was having him open up a hive, extract a section completely covered with bees, and then stick our fingers in and enjoy the honey with bees crawling all around. It was amazing.
Posted by mattu00 at 10:13 PM

From the sound of it, the caves were SO much better! :)