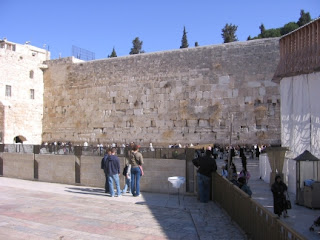 Jerusalem is different from how I would have ever imagined it, but surprisingly similar to how I should have imagined it. As a native Utahan, I imagined the city being laid out in nice squares with the dome of the rock being at the starting point. All city streets should be wide enough for a 40-oxen wagon to be able to turn around, and garbage has absolutely no place in the streets.
The opposite is true. In the Arab quarter, which is quite fun as long as you watch your wallet, the feel is strikingly similar to a crowded street market in any other Arab country. Small cars, donkeys, carts, and pedestrians all share the same 12-foot wide walkway, and it's impossible to really tell where people live. I think they have to access their apartments through back doors of the shops and such, because living quarters aren't at all visible from the street. Farther along, in the Christian Quarter, the narrow streets persist, but shops keep their merchandise inside. The shops are a bit more tidy, if less fun, and everything, just like everywhere else, is up for bargaining.
The Armenian quarter seems principally residential in nature. There are a few shops, schools, and parks, but all in all the area is quiet and clean.
Finally, the Jewish quarter tops it all off. The shops are principally art-based. Ruins are on display and wide (not too wide, mind you), clean streets are the order of the day. The walls, instead of being covered with graffiti, are covered with murals next to wide glass windows that allow everything in the shop to be easily seen. Many people would prefer to spend their time there because of the open, safe-from-pickpockets feeling.
Just a few days ago we went to the Western Wall. There were just a few of us and I can honestly say I cried. The dedication of those people and the longing for a time when they had a temple and prophets and guidance from God was overwhelming. I was able to touch wall that was built over 2000 years ago for the purpose of worshiping the Lord and it's just amazing to be right there.
Outside the Old City is a bustling metropolis. Last night five of us walked about 2 miles to ben Yehuda street. It could be confused with any street in San Fran or Western Europe. There was an old guy with a huge white beard outside a van that was literally bumping some hebrew pop/rap while about 15 kids were trying to make a mosh pit out of too few people. Up the street it was really busy. McDonalds was busy with their kosher burgers, a guy was making 2 foot wide crepes.
On the other side of the Old City, between the city and the Jerusalem Center, is the Kidron Valley. It also isn't what you imagined, but it once was. For instance, t used to be a lot deeper, but the rubble of at least 3 complete destructions of Jerusalem and several partial destructions have filled it in substantially. It isn't too inhabited because it still acts as a drainage system for the city, but there are still people living there. Mary's Sepulchre, for instance, is located there, as well as the tombs of Zachariah and Absalon.
Tomorrow we're headed out on a local geography field trip. We're seeing Jerusalem and the surrounding areas from 7 different angles. We should see Bethlehem in the distance, but we can hopefully get there in the time that we're here (It's only five miles away, but it's in the West Bank, there's a big concrete wall that they're building to try to separate Israel proper from the West Bank . . . well, I don't quite see what they're trying to accomplish. Oh well.)
Just to give you a heads up, in about 10 days we're headed to Egypt. I'm excited to tell you all about that :). Good night, I'm beat!
Posted by mattu00 at 7:26 AM

I love Egypt. Once you drink from the Nile, you are always called back... Heavy sigh...