Peace in the Middle East 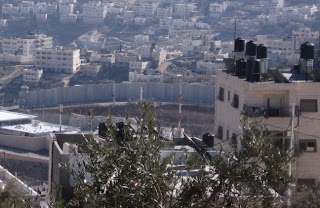 As students in the BYU Jerusalem Center, we can't even avoid seeing the current situations or having people give us their point of view. Oftentimes, we are asked what our opinions are, and we always answer with an "I can't talk about it." I would, however, like to relate the key points dealing with the tension. I think that for people to really understand the .
The first source of tension is the most visible to the outside world but the least felt in Jerusalem, the Gaza Strip. The Gaza Strip is an area on the coast by the Egyptian border that is about the size of the Salt Lake Valley. There are 1.3 million people living there, and, as our teacher describes it, it is pure anarchy. Suffice it to say that there will be no field trips into Gaza. The reason why this area barely even make local news is because between Gaza and Jerusalem, you have the Israeli Army. No one goes in, no one comes out. Period.
The second source of tension deals with what is commonly referred to as either the West Bank or the Occupied Territories. These areas, like Gaza, are not officially part of the nation of Israel. They are areas controlled by the Israeli Army, but are inhabited almost exclusively by Palestinians. After the escalation of violence 6 years ago, Israelis started piling up debris, blocking roads, and sealing off the West Bank from Israel Proper. Stemming from this action, a huge wall, shown in the picture above, is being constructed by the government. Because of huge security restrictions at the checkpoints along the wall, Palestinians are almost unable to travel to different locations either in or out of the West Bank.
Another problem is that for the past several years Jewish people have been creating settlements in the West Bank. Israeli forces want these settlements to be on their side of the wall, so it delves deep into Palestinian territory, wraps around these settlements, and then comes back.
While the tension with the settlements is felt, it's almost overlooked with the tension from the Wall. The three-story wall is seen by Israelis as a necessary effort to protect themselves from the violence experienced 6 years ago. The effect of this wall on Palestinians, however, is a stranglehold on their economy and, for lack of a better term, "harassment" at the checkpoints.
Peace is a common greeting over here, "asalamu aleyqum" in Arabic and "shalom" in Hebrew. Hopefully an agreement can be formulated that will make this vocal desire a reality.
Posted by mattu00 at 6:03 AM