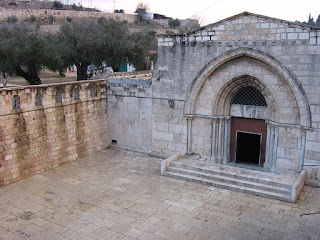 The past two days have been incredible. Yesterday we went through a few more orientation sessions and then went on a tour of the city. Brother Whitchurch was our guide. Aren and Hazik, our executive and assistant directors went with us as well. It wasn't as much of an in-depth tour as it was another orientation session, but a lot more interesting. We were stopped by no less than 6 merchants who are overjoyed to have us back. Even though the center didn't tell them, they knew a ton about our arrival. They've been waiting for us for a long time and all insist that all the students come to them.
We passed by the garden tomb and several of us plan to go there tomorrow. We got to see the inside of the Old city for the first time. Honestly, it was cramped, but rather than detract from the experience, it added to it. The Church of the Holy Sepulchre, where dozens of religions believe that Christ was buried, is right off the marketplace in the Christian Quarter of the city. The old city is in no way flat. Very little of it is accessible by any vehicle other than your feet. There are paving stones that date back to the time of the Romans. Outside the newest gate, Jaffa Gate, the atmosphere completely changes. Instead of a bustling open-air market, suddenly you're in a busy city center surrounded by cars, busses, and taxis. The funniest thing I saw was a 50 year-old Hacidic Jew (very Orthodox) walk down the street with an iPod in his ears.
Today, after our first classes, we took some of the afternoon and went to different parts of the city in groups. Several went to the Garden Tomb, some went to the Garden of Gethsemene, and some went to the Western Wall. My group went to see the tombs of Zachariah and Abdalom, but weren't able to find them. Instead, we decided to stop by the Tomb of the Virgin Mary. Even though we don't believe many of the things that other religions do, the spirit of reverence there was inspiring. The grotto steps went down at least 50 feet and there were beautiful, but unlit chandeleirs. The ceiling was dark with mold and smoke from incense, and there was a large shrine with plexiglass covering where Mary is believed to be buried. We didn't take any pictures inside out of respect, but it was beautiful outside as well.
Tomorrow we have our church meetings. Sunday here is just another day of the week and Friday and Saturday constitute the weekend. After church I hope to go to the Garden Tomb, so I'll let you know what it's like.
Posted by mattu00 at 12:04 PM

I don't know about you, but the Friday, Saturday weekend really throws me off. It always felt a little strange to call or write home on a Sunday and say, "Yeah, we went shopping and blah, blah, blah... today..." when you really feel like you perhaps should have been in church.

Anyway, glad to hear that things are going well!