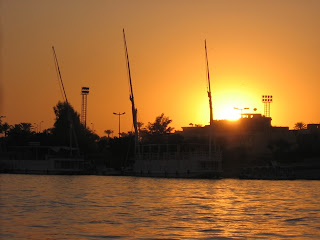 How many of you have ever slept on a passenger train? I think I've finally found a form of transportation that I can actually come out of feeling good the next morning. As a continuation of the Egypt entry, after the day's activities in Cairo and Giza, we spent the night on a train and arrived at Luxor early in the morning. Immediately after checking in at the hotel, we all piled into carriages and went down the street to the temple of Karnak.
If there is one word to describe the temple of Karnak, I'm afraid that I'm not familiar with it. It is honestly the most magnificent structure I've ever seen. I was awestruck by the enormity of the pillars, obelisks, and its sheer size (64 acres). Tell me, how does one carve a 90-foot obelisk out of one solid piece of granite, transport it 100+ miles, and then stand it up in a position that aligns perfectly with the buildings around it to within a hairbreadth? Too heavy for pulleys, too tall for manpower, too awkward to transport 150 Goliaths from Palestine. Well, I know the answer, but it would take a while to explain. If you want to know, you'll have to comment on it. :)
Something interesting about Luxor is the annual rainfall: exactly 0.00" Honestly, there are still mud brick walls standing in the exact position that they were in 2000 years ago. Our guide, Rifatt, has lived in Luxor for 55 years and he's never seen rain there. It would seem that the principal reason for this is because all weather patterns, from west to east as normal, would have to cross the Sahara. Enough said.
The temple of Luxor, while nearly as impressive as Karnak, wasn't quite as well received. This is probably because of the amount of time the group had already spent in the sun, so we weren't there as long. After some R&R at the hotel we went to the Luxor Museum (it opens at 4:00 after a little siesta). The statues, mummies, ancient chariots, and artifacts there are immaculately carved and preserved, and it's pretty fun to make up meanings for the carvings that adorn every single object. :)
After another good night's sleep we were off to the valley of the kings, the burial place of dozens of Pharoahs. Probably the most popular inhabitant of the area is Tut Ankh Amon, known in the non-Egyptian world as King Tut. His mummy has been removed from the Cairo museum and replaced in the tomb (with guards on all the surrounding hilltops), and one of the three sarcophagi (coffins) is still there. Most of the rest of the thousands of artifacts are in the Cairo museum. The interesting thing is, the most well-known citizen of the valley of the kings is probably the least influential in Egyptian History. He only ruled for ten years, died before the age of twenty, and his tomb is only one-twentieth the size of, for example, Rameses II's.
After other popular places such as Queen Hatchepsut's palace to the Sun God, Amon Ra, the Valley of the Queens, and Rameses III's Esana Temple, we wandered the streets of Luxor until evening when those who wanted to went on a feluca. A feluca is a small sailboat meant basically for tourists, but for us it was a great opportunity to see the sunset from the Nile.
Finally, after some last-minute shopping, it was back to the train station. The next day we arrived in Cairo and spent time in the Cairo museum. We actually found some great hydrocephali (aka: similar to the facsimile in the Book of Abraham), oh, and you could hardly miss the tens of thousands of priceless artifacts. The ownership and subsequent sale of any one would cause the owner to retire, plus all his great-grandchildren.
Following lunch it was off to the mosque that I mentioned in an earlier entry, and then off to the bazaar. I've never seen so many people crowded into one street before. Yet, even though there were 44 students among thousands of shoppers, we were still the most popular (US Dollars still pack a punch). The sights, sounds, and smells of a bazaar are completely indescribable, and I have no pictures to give you a correct sense, because I purposely left my camera on the bus.
Egypt is a country unlike any other, well, unlike any other country that I've visited (so three...and counting). Non-natives don't drink the water, unless they want to risk a severe case of Pharaoh's Revenge (aka. the runs). The bartering often starts at a markup of at least 800% (I had a guy try to sell me a thimble for about $20. I offended him when I laughed, hard), and you pay the porter in any public restroom. The cultural differences, however, just add to the experience. Aside from that, many of the readers of this blog (from a totally LDS perspective, sorry about that) can call this country home through Ephraim and Manasseh. Give that thought a bit of a chew while you plan your next family vacation. Until next time, then.
Matt
Posted by mattu00 at 6:38 AM

The train ride was definitely the highlight of my first few days in Egypt--probably because that would have been the first time I slept in like 3 days. It was the first time any of us had slept in three days.

Oh, and Karnak temple is absolutely amazing compared to Luxor. It's a hands-down contest. I suggest going to Luxor first so that your breath is still taken away when you go to Karnak...for all of you who are planning your family vacations.

I loved Egypt!! The description you gave was great. Just one request- a couple of pictures of the temples would really add.