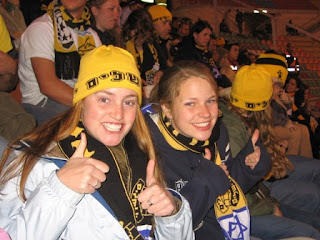 We've been told since we got here that the Beitar Soccer fans are nuts. Well, in the soccer game that we went to, I think it would be a toss-up between the Beitar fans and the newest addition to the Jerusalem Soccer Arena: Us.
The interesting thing about soccer games here is that there are no bells and whistles. Usually if you go to a sporting event in the states you have your cheerleaders, halftime shows, and a JumboTron to see all your instant replays.
Here you have a stadium, 22 players, several thousand fans, and a ball. Well, you could probably add the guys that walk around selling coke, bread, and sunflower seeds, as well as the guys that enter with big plastic bags full of merchandise that they sell whenever stadium representatives aren't looking. I have scarf.
Posted by mattu00 at 3:04 AM