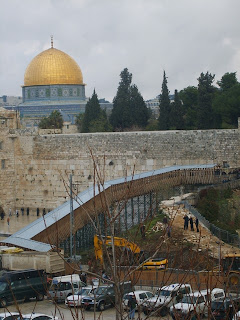 It is about 5:00 in the morning in the Midwestern United States, so most of you are now sleeping. When you wake up you may wake to news of further conflicts in the middle east. To be specific, in Jerusalem. Now don't you all panic, we're all perfectly fine, I just wanted to fill you in on what is happening.
One of the antecedents to this story I already wrote about. The wall that is being built between Israel and the West Bank has caused high tensions and high tempers. A new development occurred last Saturday when we were driving back from Egypt. About two years ago, during heavy snows, an earthen walkway leading to the temple mount was damaged and considered unsafe. There are several different ways to access the mount, but this is the only one that non-muslims are allowed to use. It is principally used for tourists and as a police entrance for crowd control during Friday prayers. In order to accommodate the need to access the mount, a temporary ramp was constructed. Everything that I'm talking about can be seen in the picture at the top.
The temporary ramp, however, is becoming dilapidated, and the Israeli government saw fit to create a permanent structure(for which they need to install 5 large pylons as a foundation). Last Saturday, a backhoe was rolled into the city, right near the temple mount, and violence was threatened by local Islamic leaders. The weather cooled tempers for a few days, but today, the Muslim prayer day, the spark fell into the powder keg. The 1000-strong police force, plus 2000 backups, answered hurled rocks and bottles with tear gas, rubber bullets, and stun guns. So far there have been a few injuries on either side, but no casualties.
In speaking to the Center's director, he said that this type of incident doesn't happen every day, but only time will tell if this will all just blow over, or if it will escalate. Let's hope for the former.
Posted by mattu00 at 3:49 AM