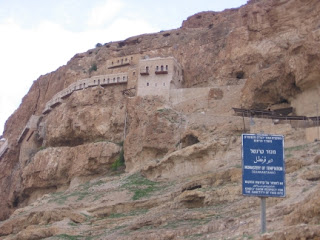 Jerusalem and Jericho. You wouldn't believe the difference between these two cities that are just a bit more than 20 miles from each other. The most obvious difference is the drop from the Judean Wilderness to the Jordan Rift Valley, from 2500' above to 1350' below sea level, the lowest point on earth. (Actually, Jericho is only 1200' below. The dead sea is 1350'.) Suddenly, instead of 48 degrees with wind and rain, we stepped out of the bus into 85 degree, sunny, balmy weather. You could buy bananas just off the bus or fresh-squeezed orange juice a few steps later(squoze and squozen aren't words, apparently).
A tel is an archaeological dig. The actual tel of Jericho is quite small. I would guess that it's no more than 1.5 acres. The population was a lot bigger than what would fit into 1.5 acres, but most people would have lived outside of the walls until they needed protection. The point is, the children of Israel would have had a lot of access to resources in the Jericho area once they all retreated to the city. The other point is, marching around the city would have been a mere 20-minute stroll (if that). So the common idea of a huge city with walls hundreds of feet high isn't feasible. You probably shouldn't have walls that are taller than your city is wide. There were, however, both an outer and an inner wall for additional protection. This city couldn't be taken lightly.
Jericho is considered by many to be the oldest, continuously-inhabited city on earth. Archaeologists have found the bottom of a tower that dates to Neolithic times (New Stone Age, 8000 BCE). It's still sitting there, large as life. Today there are about 19000 inhabitants.
The highlight of the day was the Greek Orthodox Monastery that overlooks Jericho(pictured above). It is literally built on the face of the cliff that hangs over the Jordan Rift Valley. Quite often, while walking along the back, you'll come to a place that you have a bedroom door on one side and a cliff wall on the other that you have to duck under, or you'll hit your head. For some reason or another the monks took a liking to us and we were the first tourist group in about 10 years to go out the back door and hike to the ancient monastery that's on the top of the mountain. Talk about a view! Wow. Some students sang "High on a Mountain Top," only to realize that this mountain top is still below sea level. 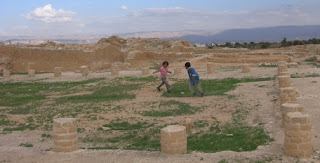 Because of the beautiful winters in Jericho, Herod frequented his wintertime palace. It's just a few miles south of Jericho and is scarcely visited. You can still see some of the pillar bases and all the roman baths. The motifs have disappeared in recent years but you can still see some on the rocky floor. Ironically, instead of Herod's palace, now it's become a place where little Palestinian kids (pictured here) play tag. They have no idea that their playground is a place rich in history.
Posted by mattu00 at 3:58 AM

How funny, Matt! I remember reading "squoze" and "squozen" in another blog and thinking "I've never even heard those words before!"
I have so much trust in you that I didn't even suspect they weren't words at all! How silly of me. Julia

Funny you should say squozen. My grandpa and I have used that word for over 10 years. Spread the word!

Jerusalem and Jericho. You wouldn't believe the difference between these two cities that are just a bit more than 20 miles from each other.
============
u got to be kidding